Upgrades are a way to unlock new powers and change a Torimori's appearance. Adding upgrades to a torimori allows it have features and qualities beyond the basic species anatomy.

Currently, the only way to add upgrades to a torimori is by using Potions. To upgrade your torimori with a potion, first make an updated reference to show the new upgrade. This can either be a brand new reference or an edited version of its old one. Submit the updated reference to the masterlist along with a list of potions and upgrades used. Once it's been approved the potions will be used up, and the masterlist will be updated with the new upgrades.

You can also create a new torimori with upgrades already on it. Just draw the upgrades on its initial reference and submit it with a list of potions and upgrades. The approval process works the same either way.

One potion will usually only add one upgrade. Unexpected Mixes, however, are combinations of multiple upgrades and require multiple potions. Some potions affect upgrades in other ways; a Refresh Water S or Refresh Water M will remove the visual effects of upgrades, and a Potion of Change can replace an upgrade with another one of the same power.

It's also important to note that you can also combine upgrades in a variety of ways, even beyond mixes. You could use both Horns and the Metallic material to make metal horns, or Paws and Air to have transparent paws, or Archaeopteryx Hands and Fur to replace the wings with furry little arms. Feel free to experiment with any combinations you think would be fun. 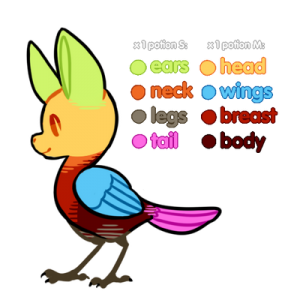 The different zones and their potion requirements.

One very important thing to remember when planning to upgrade your torimori is the zones. There are eight different zones on a torimori, and one potion will only add one upgrade to one zone. Not all potions will work on all zones. A medium sized potion can upgrade any zone, but a small one can only upgrade the ears, neck, legs, and tail zones. You can not use two or small potions instead of a medium to upgrade a medium-only zone.

All currently known upgrades are listed here. For more detailed information on each upgrade and its effects and limits, please check that upgrade's page.