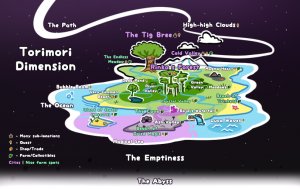 Torimori Dimension is a little but potentially endless world created by magicians of Nyamrian Workshop specially for torimoris and some other pacific creatures. It's not for humans, so only some creatures can enter this place, using a special portal placed in Nyamrian Workshop. Some torimoris travel back to the workshop through The Path location.

Torimoris were planned as the first creatures that have their own soul to make their own decisions. They can be very different and able to improve theirselves as a person. It was something new for Nyamrian magicians, and successful.

First they noticed that some torimoris are much more powerful and clever than their owner. That was happening mostly because these owners overestimated their powers and considered themselves as the powerfulest magicians of world, so they ordered the same powerful torimori. Faced with reality (sometimes with death, but don’t worry, resurrection is part of the workshop’s guarantee), the torimori at best found their way back to the workshop, but at worst turned out to be food for other creatures, especially if they were in the Nyamrian World, which is actually dangerous, even for the most powerful torimoris.

It was surprisingly, how smart and powerful they could be. In some ways, they acted like humanoids, they were curious as children. Some of them even inclined to think about the meaning of their life. Then magicians found their possibility to master the powers, and that's not like something that can't happens at all, because every creature made in this workshop was able to do this, but they were the first for whom this choice was fully conscious. They learned to make themself better. Like people.

Every world is already belongs to their creator, or the group of creators, so it might be dangerous to settle them there. And magicians decided to create a separate dimension for torimori beings, to give them everything they need to learn themself.

Torimori can't die completely in this dimension - their soul contains all information and memories about them and their life. However, they can lost their physical shape if it's too damaged. In some cases, they can be resurrected by powers they mastered, or the shamans and healers. In other cases, they will be returned back to the Workshop and creators will fix them and back to their common life in dimension.

Torimori Dimension has no end, but it has their center - the only stable place of dimension. It consists some territories with villages, meadows, forests, mountains, even oceans and islands. Anything outside these locations is the endless Emptiness, where everything can exist and everything can happen as some kind of illusion created in the mind of traveler. Any step out the stable locations "stretches" the world and create a new temporal reality that stays in the mind, so torimori still getting experience here and even can back here later, but it dissapears when torimori leaves this place.

It works like a dream created by a sleeper, and toris here can be much more powerful, if they can control their mind enough. Usually these realities are pretty real, though, because no one knows that these places have no rules. Like in dreams, it's hard to believe and hard to control.

With a chance, torimoris here can meet each other if both admit that it's possible (usually they do). Also, if there are two or more torimoris - they build this reality together. However, it makes the things harder, because if one of these toris isn't ready to see something that another tori wants to - their minds dispute reality and the one whose belief is stronger wins. The more torimoris - the more difficult to create something new, since this requires more powers and more minds that are prepared to this new.

Technically, it just means that only things you expect and ready for - can appear in the emptiness. The mind creates the rules. When the torimoris see each other, it also means they fully accepted existing and the freedom of each other (another soul and another mind), and accept that fact that they can create their own rules too. (however, this is pretty unconsciously - torimoris don't know how it works and feel pretty puzzled when unable to see something that they used to see while being alone) So, two realities are arguing at such a moment, and this sounds like arguing within oneself. On the one hand, you accept your companion and you cannot refuse this idea that they are free to do what they want (you cannot control them), on the other hand, you want something to happen, but they don't want to see that. What to do? What wins?

Emptiness is an interesting thing and has not yet been fully studied not only by torimoris themselves, but also by the magicians of the Nyamrian. Emptiness is not a feature of the Torimori Dimension, it's the null material that exists in any world, especially in the Nyamrian.